Podgorica – Area below a little hill

Following an amazing few days of skiing in the mountains of North East Montenegro it was time for us to move on to a City. Podgorica is the capital of Montenegro and is situated close to the centre of the country.

According to Wikipedia Podgorica means “area below little hill”, which is an apt name since apart from the river running straight through it, the city is completely flat. After having been in some extremely rugged and steep sided terrain it was quite unusual to be met with a wide expanse of nothingness and with a population of only around 150,000, the city itself offered only a little more than nothingness.

Most research on Podgorica turned up very little in the way of sightseeing opportunities, A bridge, a couple statues, an old (read derelict) town and a few short streets in differing parts of town, So we didn’t really know what to expect.

Our hotel as mentioned before was cold and very smelly, but very cheap and located in Stara Varoš. This meant we immediately ticked off one of the items to see (the old town). Also within 500 metres walk was the Most na Ribnici; apparently the oldest bridge (from Roman Times) in the city. Although it turns out it was rebuilt in the 18th century. Unfortunately there was rubbish everywhere around it.

The Millennium Bridge, shown above, is a relatively impressive suspension bridge crossing the river at a good height but it was a bit dirty and could do with a lick of paint. The statues weren’t particularly impressive and many of the streets had falling down, boarded up or derelict houses.

The above few paragraphs have been particularly negative, but there are some positive aspects to Podgorica. It is extremely small, and so we were easily able to wander from our hotel, into the city centre, around a few run down parks, over a few bridges and eventually even found a row of cafe-bars. These were quite chilled out and three were from the same company “Culture Club”.

Portion size in Montenegro is particularly large, which is remarkable given the generally low prices. A plate stacked high with sausages and potatoes and corn bread and onions was meant to be a late brunch snack, but it went down a treat with a mojito and a coffee. This was the standard fare in Montenegro (meat and potatoes) and so we tended to crave fruit and vegetables quite a lot.

There are many stray dogs around Podgorica, and Montenegro in general, but they were all friendly and didn’t seem to be rabid or diseased. Jenny in particular is a huge animal lover and so made a few friends along our travels, the favourite being “Patch” (we named him) who followed us walking around the City for many hours following us and asking for strokes behind the ear at any opportunity.

Finally, the people of Podgorica are lovely, they are always up for a chat and will help you to find your way. This is really the star of the city; you never feel in danger and always feel able to get about and have a good time.

Personally, unlike the rest of Montenegro we would not recommend you spend any time in Podgorica. Although it is cheap and easily walkable, there is very little to do or see and it is mainly just a working city, trying to build a viable capital in a new country. I have no doubt it will get there, and there is a lot of building work going on, but it currently lacks any identity to define itself by.

Next blog we will take you through the joys of coastal Montenegro, which are more famous and really beautiful once more.

We ate in a restaurant called Hemera (part of the Astoria hotel chain) and it was probably the most expensive place we ate in the whole of Montenegro (about EUR 60 a head, including a cocktail, starter and main). The starters were very good and there was a lot more fresh vegetables than you have to get used to in Montenegro. However for what you got it was overpriced and we preferred the food in the Gyros Grill we went to in the early hours of the following day.

We also managed a trip out of the city to “Niagara Falls”. Which is a waterfall on the river of Cijevna, a little way out of town. Although we haven’t been to the real Niagara Falls in North America, it is probably more impressive in scale than the Montenegrin version. It was however quite cool to be walking over the rocks right next to a torrent of water and a lot of other people seemed to think so too as it was one of the most busy areas near Podgorica that we went to. 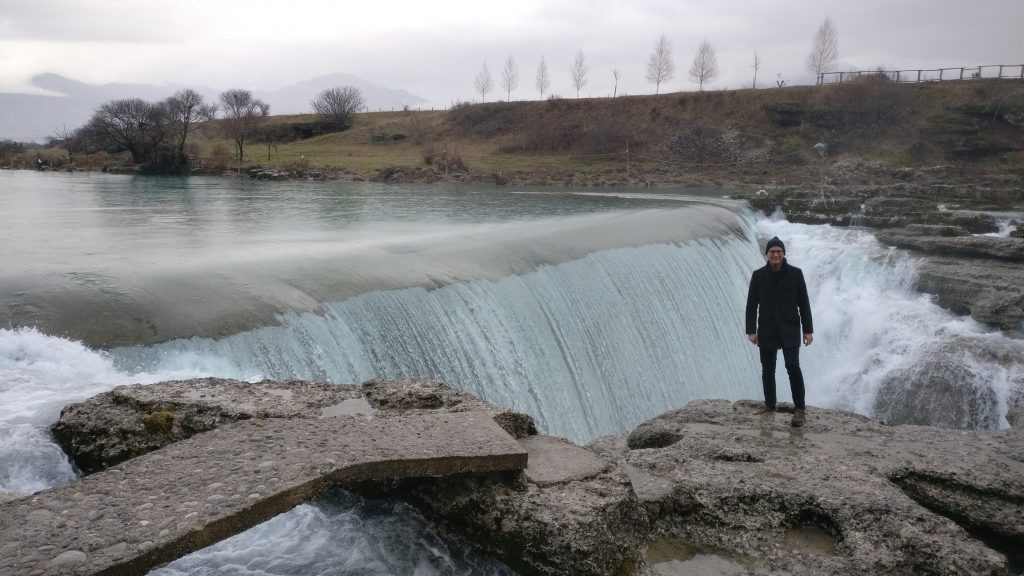 We lost track of our costs a little by this point so much of the below is merely an estimate.