The seas around Paros are crystal blue and what better way to explore them out on a boat. Captain Ben was our day cruise of choice, we were deciding between Ben and Yianni but when we got through to Yianni it sounded like he was in a hurricane and said his boat would not be ready for ten days.

We don’t like mornings, I think we have made that clear. And so even when a fun day is ahead of us we still struggle to get out of bed. Especially when sleeping off the amazing meal at Siparos (see yesterdays blog for that). We had to get to the south of the island by ten where we huddled with other tourists until a big red boat with “Captain Ben” emblazoned on the side turned up. 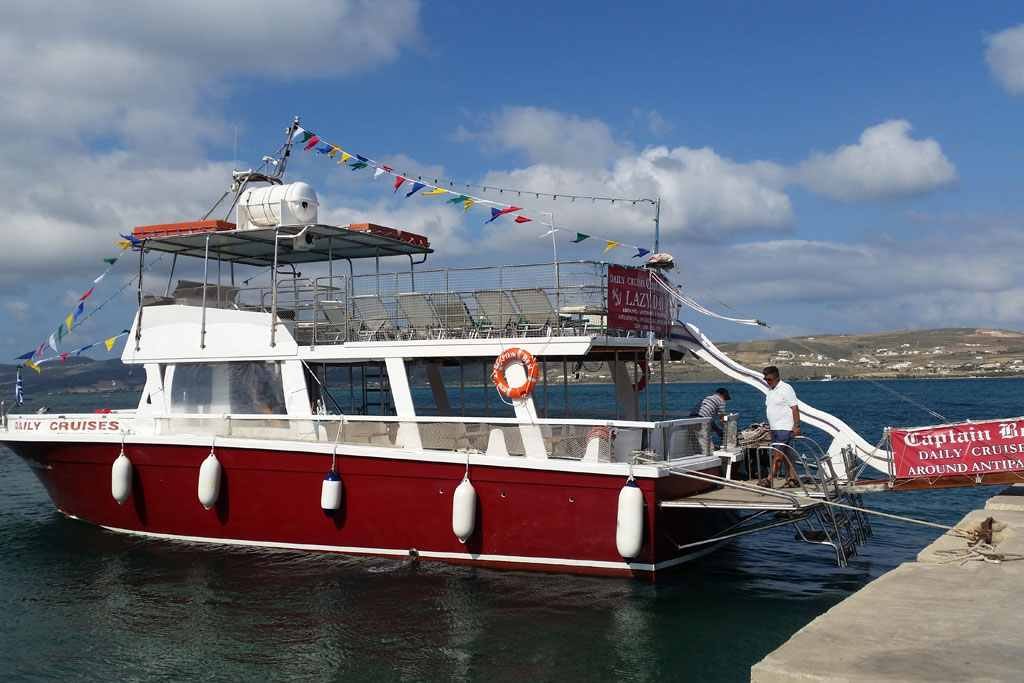 The main feature of the day is jumping in the water and attractive spots along the way. The Captain (Ben) drove very close to the cliffs to allow us all to take beautiful photos of the scenery around Paros and Antiparos.

There were some really nice stops and we both got to do a fair bit of snorkelling in the crystal clear waters. Of course there are always lots of other people and so you don’t see many fish. But it’s still very pretty. 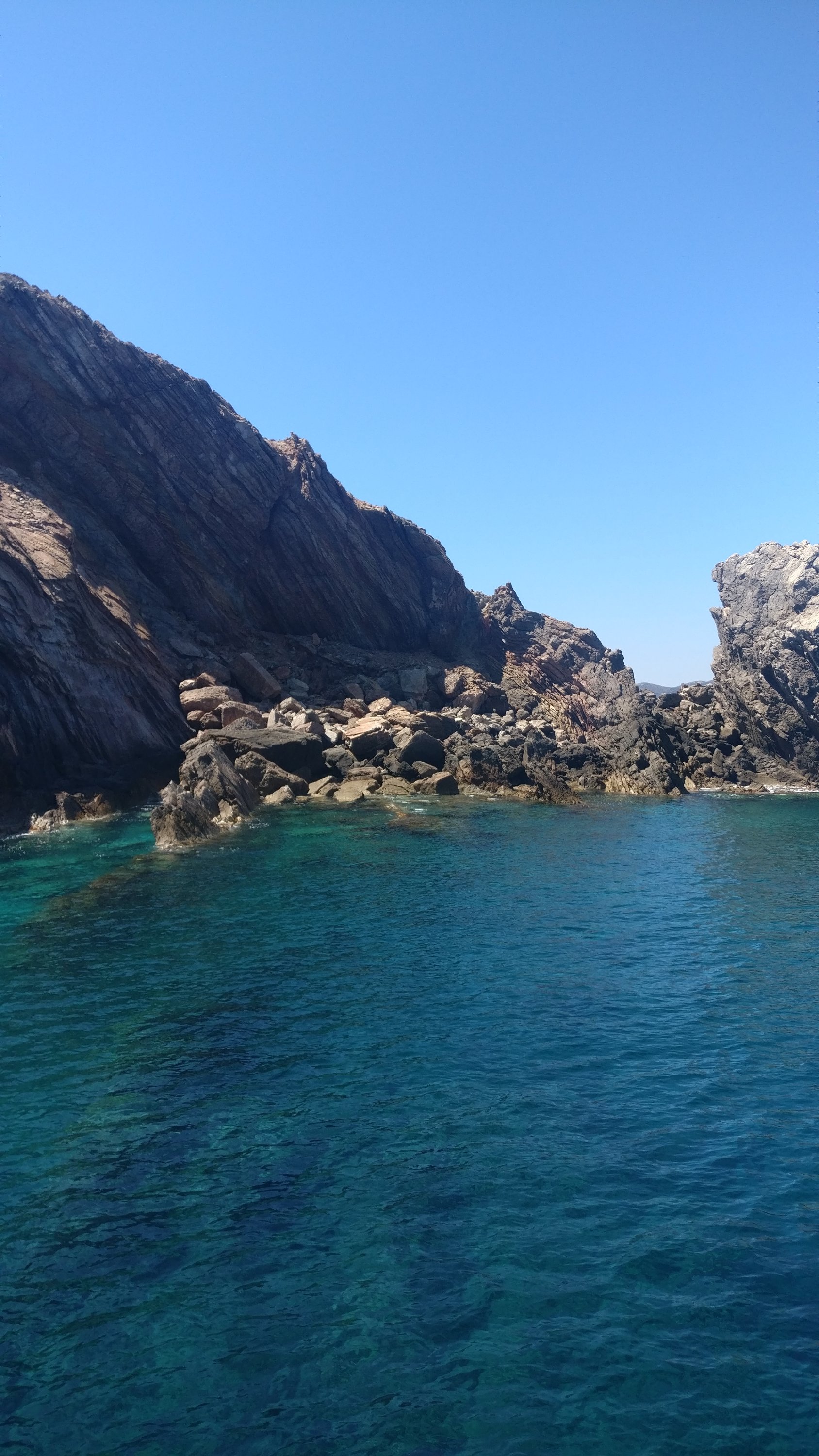 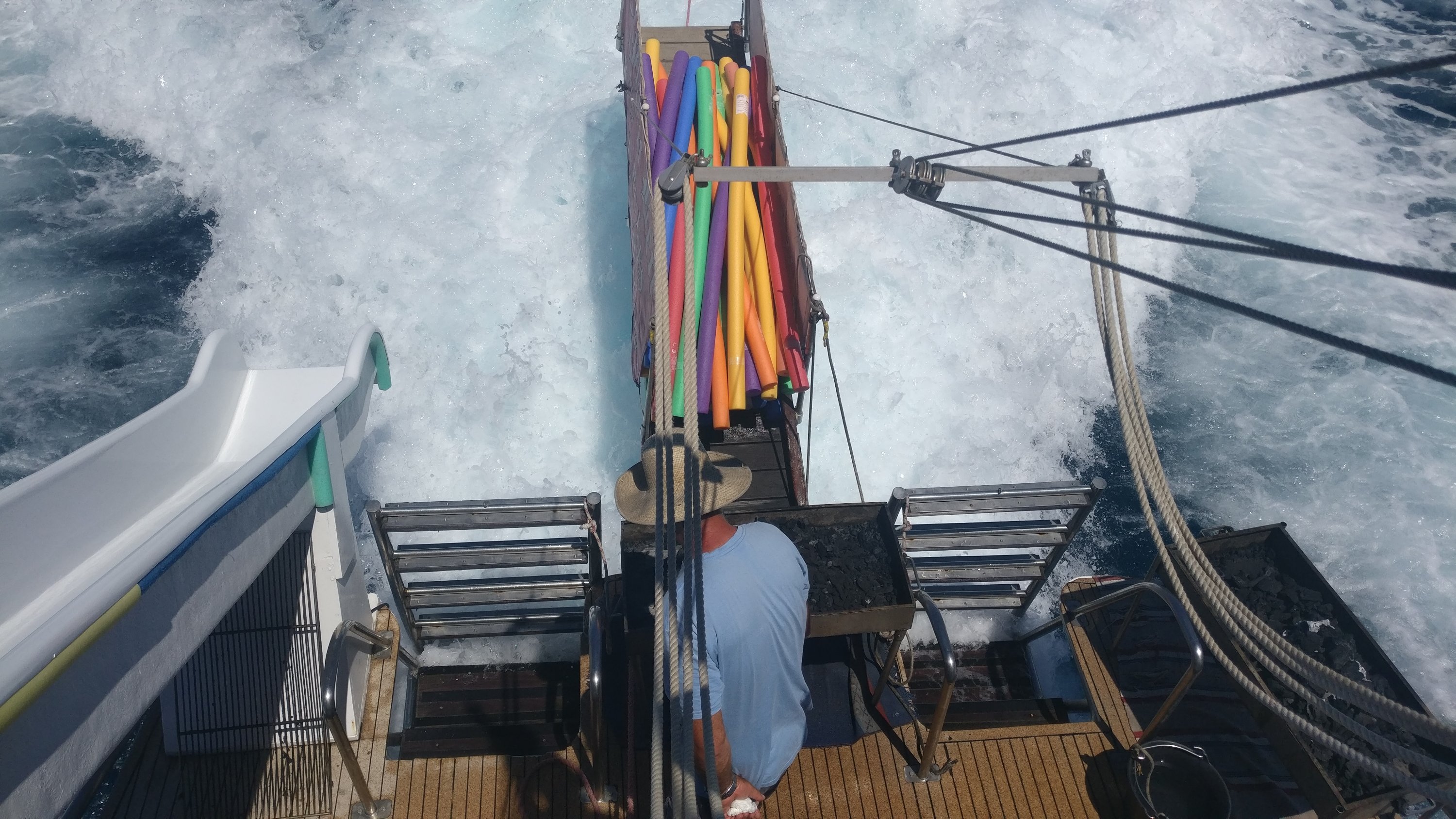 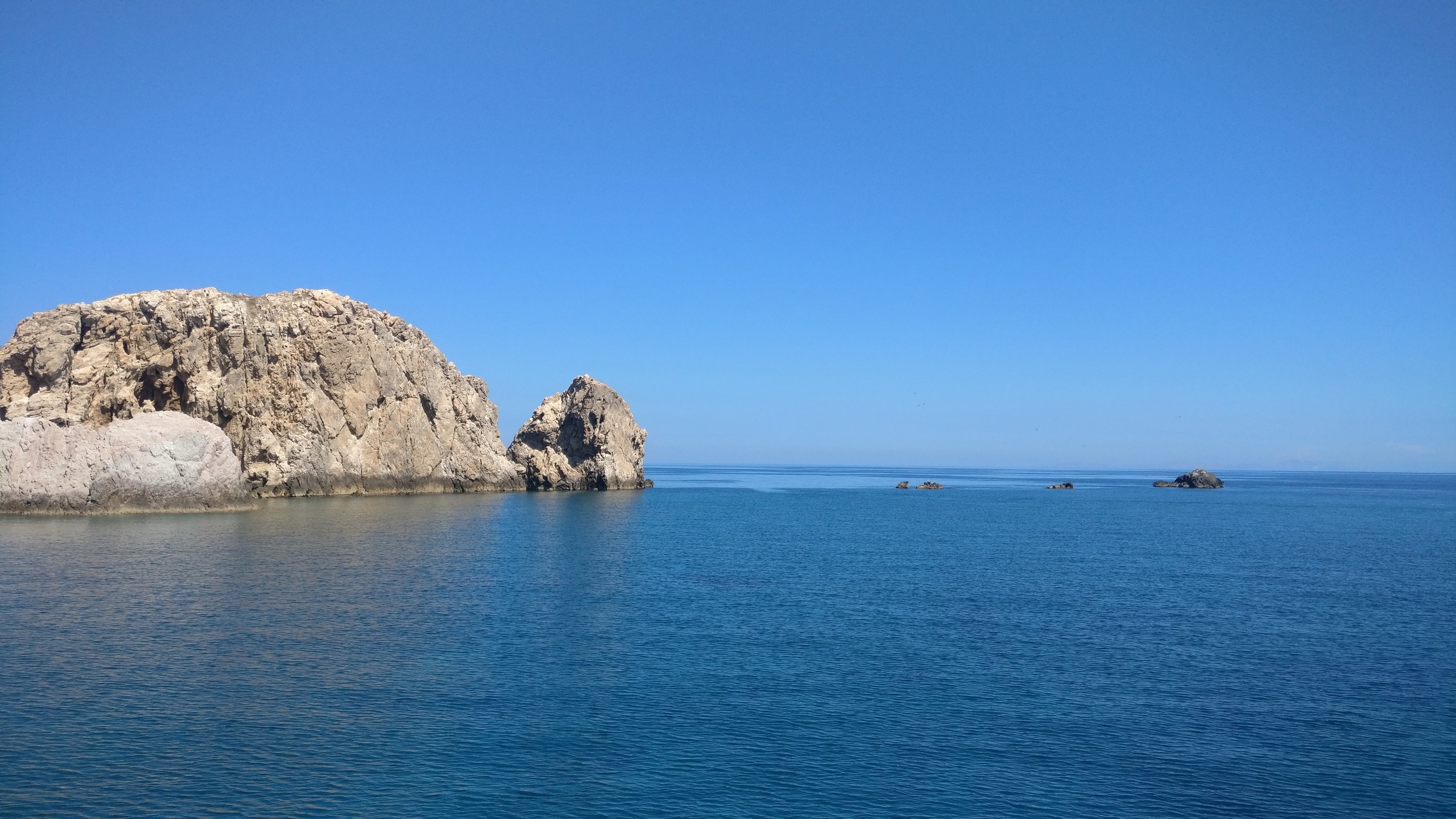 After a few chances to swim in the ocean we end up at a cove accessible only by boat ⛵ where we stop a while to relax on the beach. I think this is mainly to give Ben’s heart a break since he spends half the time in the water demanding people don’t swim too far or stay away from the rocks.

They loaded us up with a snack of octopus, calamari and sausage (yum!). And then request we wash it down with a pint of Ouzo (yuck!) We left our glass full minus a little sip. 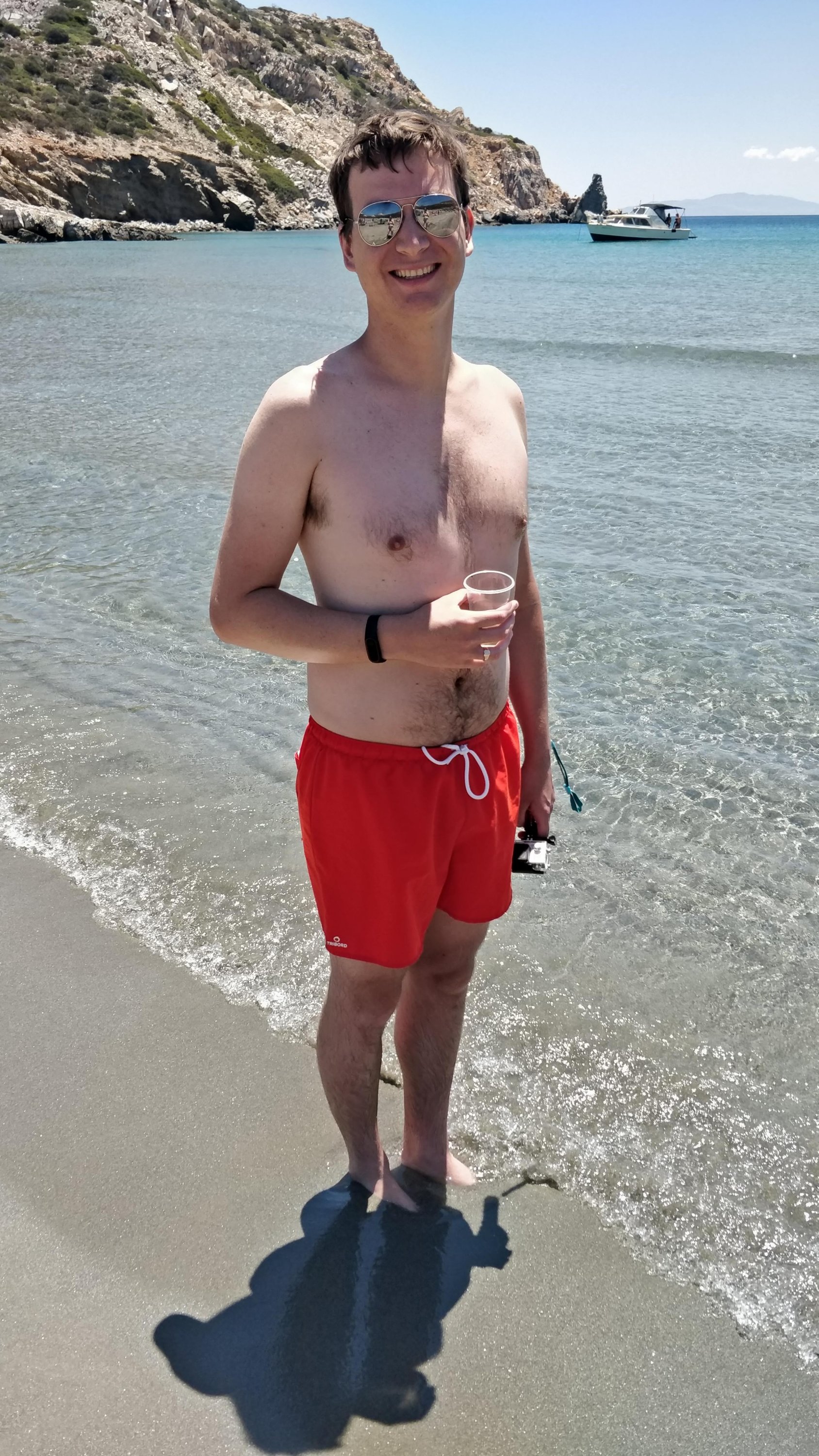 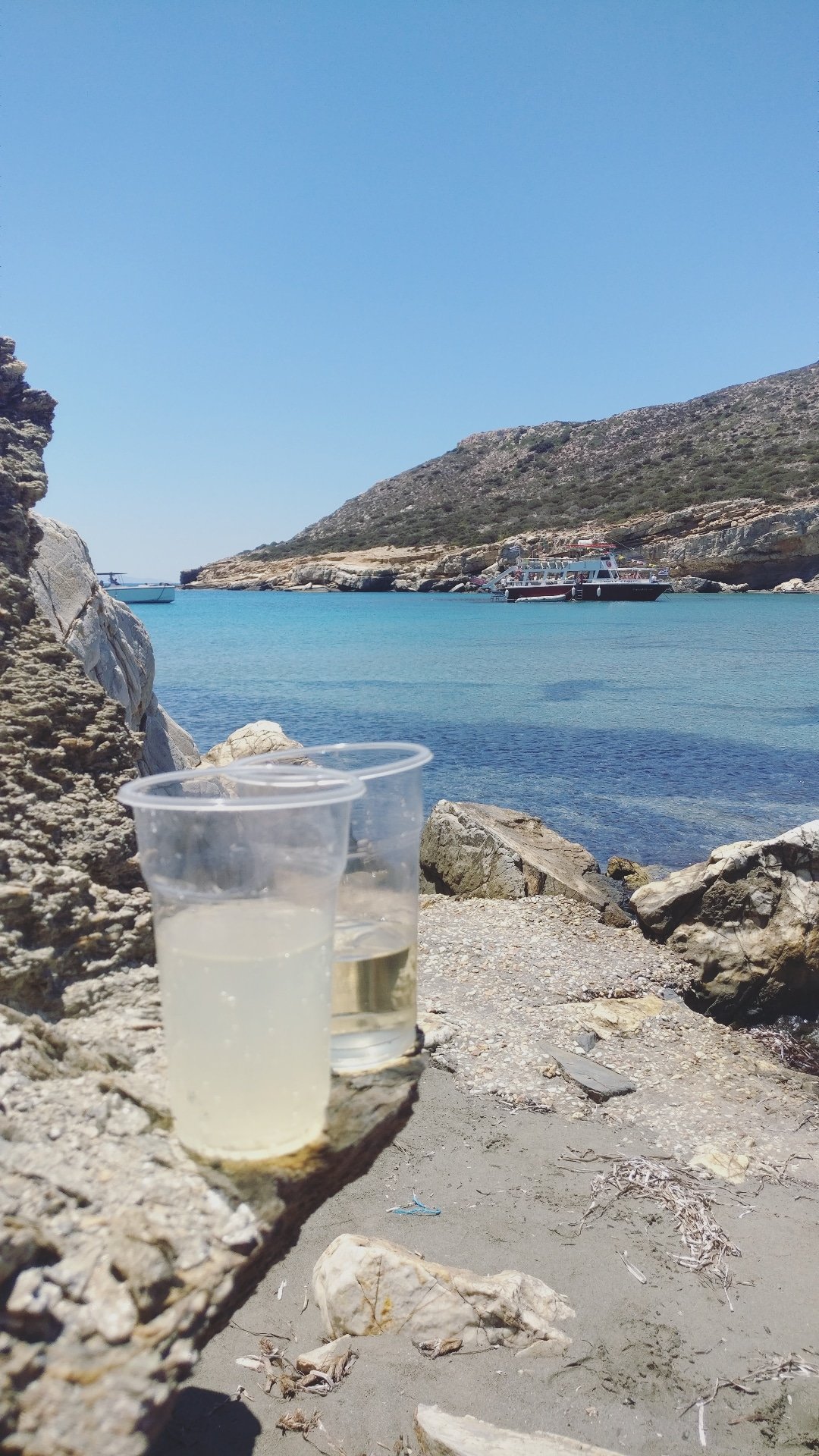 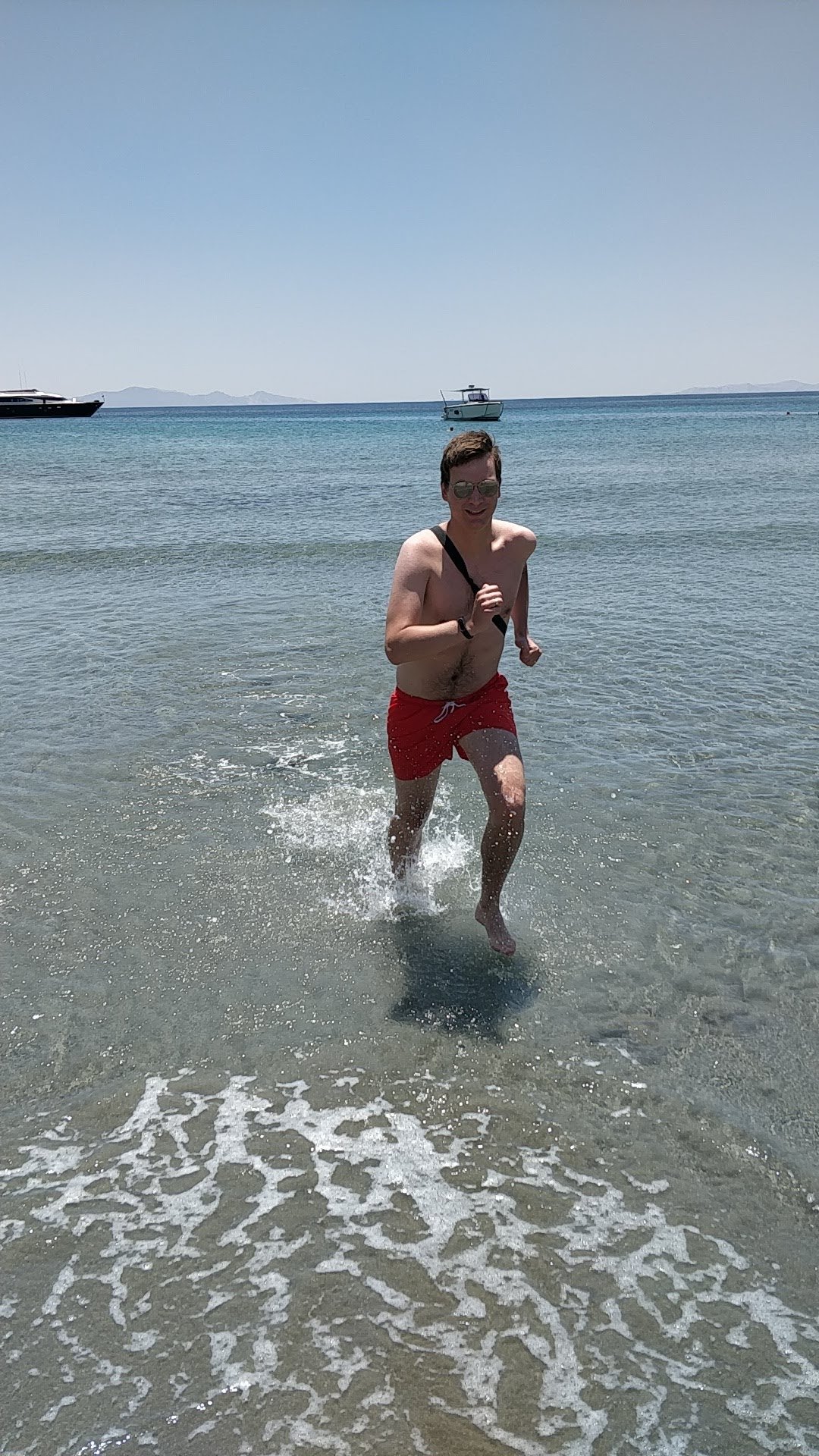 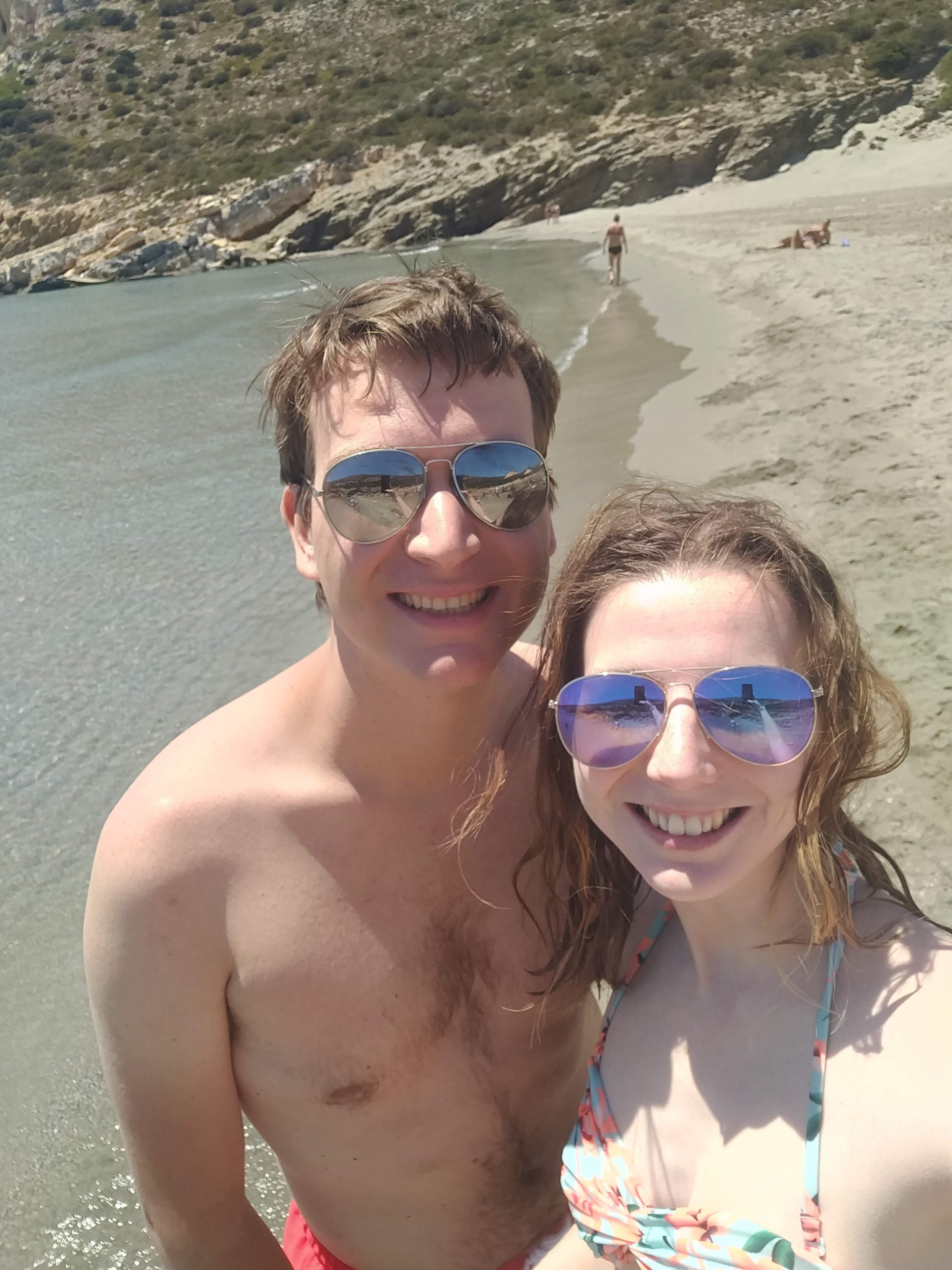 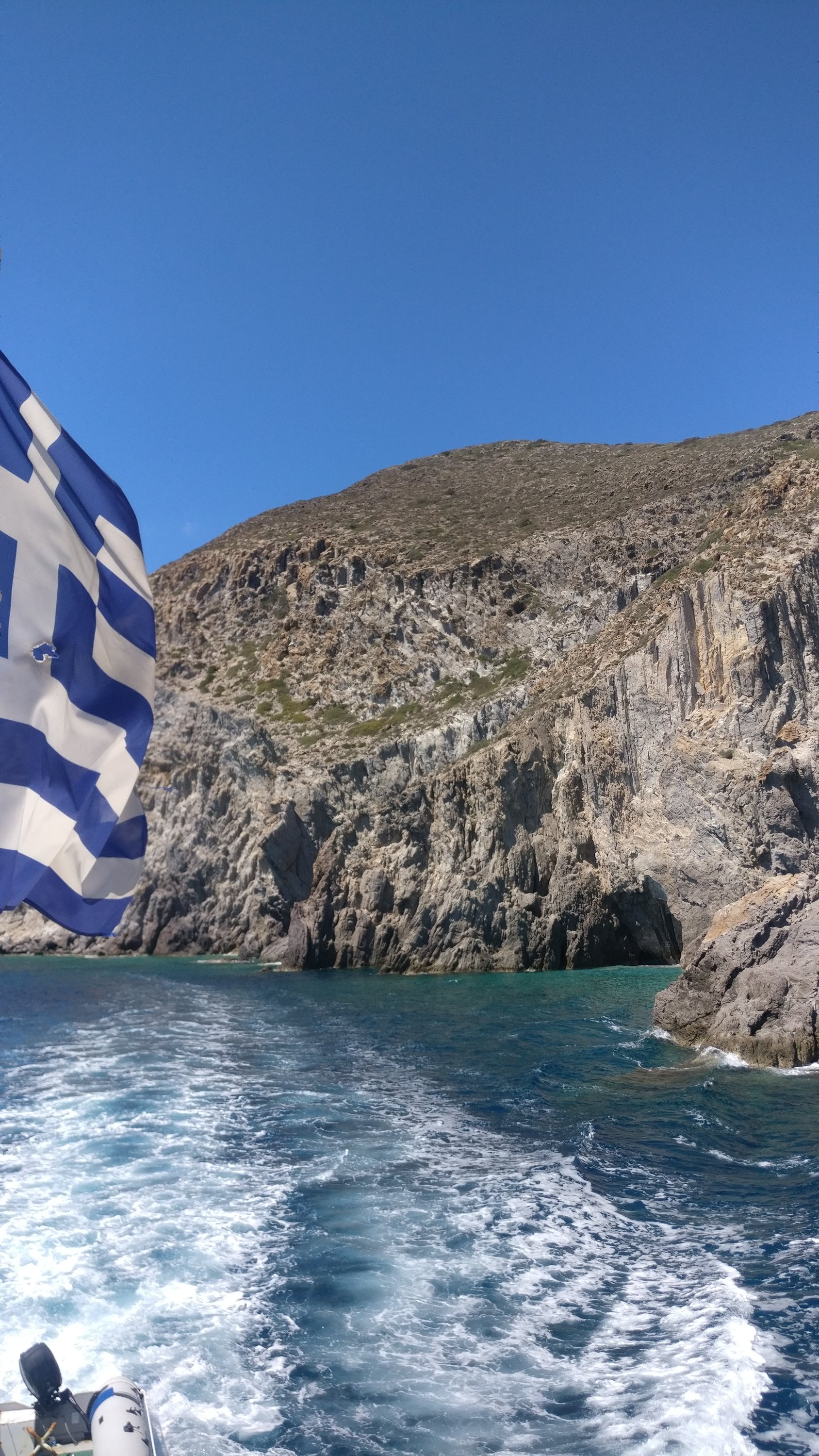 I even got to practise my Baywatch running, dig a couple holes and top up my sunburn. The equipment is quite good quality and the staff are very helpful, serving drinks and putting out a load of beach toys for the time on land. 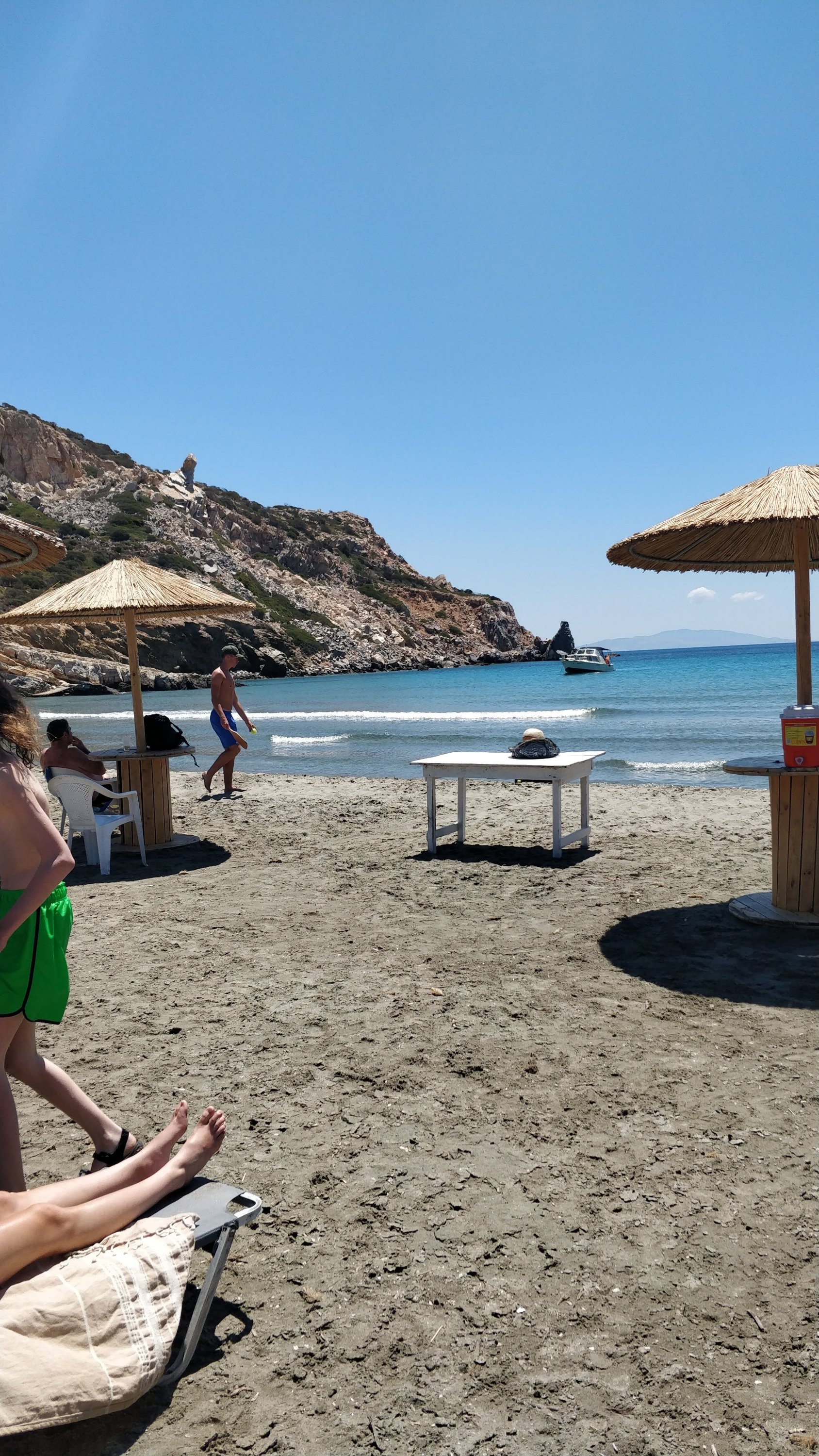 When we got back to the boat they served up lunch which was delicious and good portions too. Some Greek salad, pasta salad, pork and chicken skewers and some potatoes. Later they brought round some whole fish as well!

One exciting feature of the boat was that it had a slide off the back which went straight into the sea. We got some videos which I will put up later. Ben and the other staff were very good at making sure the slide was wet and the exit was clear. And it was a good novelty to slide down into the sea. I even jumped off the top of the boat.

One of the most exciting features of the day is an archway that you can swim through and people climb up to the top to jump off. Given the recent issue my brother had from a similar exercise I decided to not jump myself, but instead watch others do so. Unfortunately neither of us got a good picture of the archway so here is a nice one from the Captain Ben website. 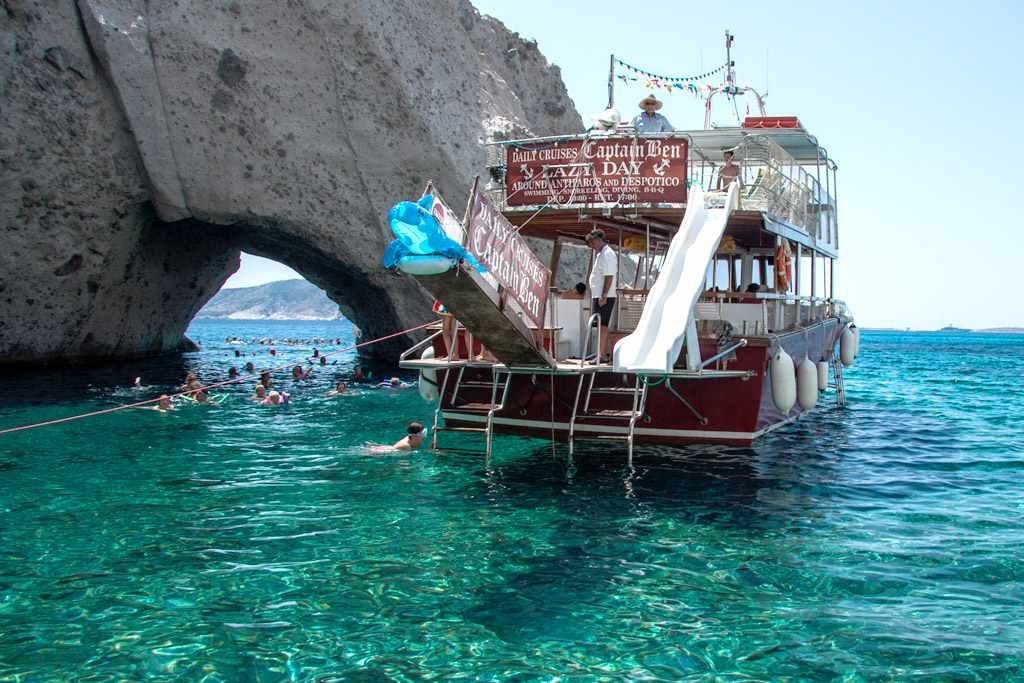 After such a long day in the sun we were both very sunburnt, tired but very relaxed. We headed home and cooked some supermarket pizzas before wandering into town so I could live out my childhood with a big bunch of candy floss. There was even a bit of traditional Greek dancing and music going on in the centre of town.

We finished up with some “icecream rolls” where they make the icecream in front of you on a really cold plate. It’s quite fun, but at 7 EUR a bowl it was a bit pricey! 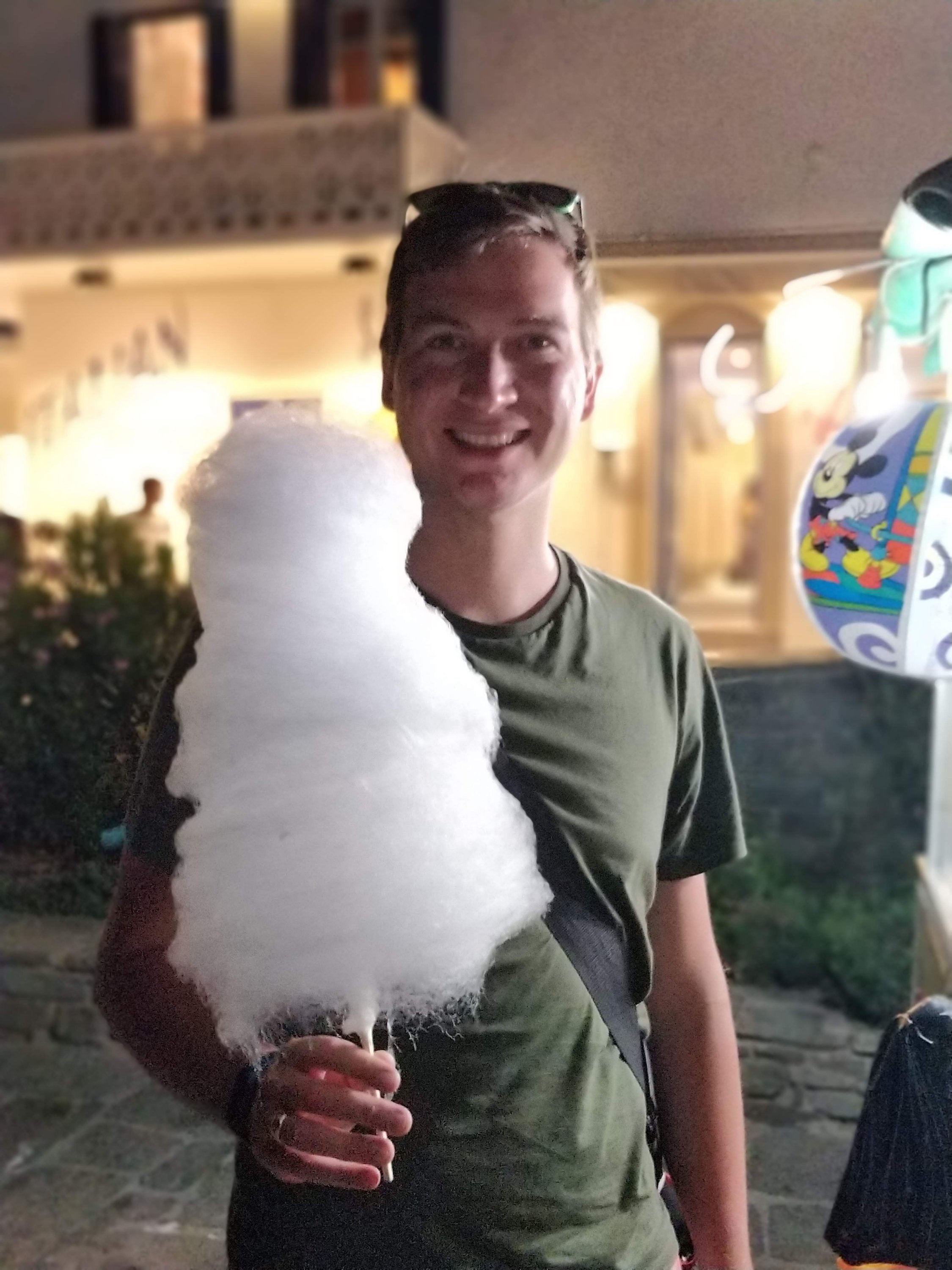 Anyway that’s it for today. We have another early morning tomorrow (groan) to go diving so these blogs are going to be a little late.